Vorige week werd Marie-José gevraagd om als voorbereiding op een paper van een rechtenstudente de volgende vraag te beantwoorden:
What are the current obstacles for girls regarding the right to education in Sierra Leone?
Het antwoord:
Although in Sierra Leone there are  a lot of laws that should provide in education for women and girls, in daily life it really is a privilege to go to school. Sierra Leone is still suffering from a devastating war at the end of the last century. There is a lack of good qualified  teachers and you still can see school buildings that are destroyed. In addition in 2014 schools were closed for almost a year because of the Ebola outbreak. So going to school is not a constant factor in the lives of children.
Poverty is widespread and families will send rather a boy to school then a girl but the fact is that in some families even the boys can not attend school because they have to work to earn some money.
Childmarriage and teenage pregnancy are still widespread probably because in certain communities the idea rules that as soon as girls get breasts they are ready for marriage and to get pregnant. Also female gender mutilation is still a common practice often at young age.
Later in de week bracht een van de YAN een bezoek aan de mijnen in de buurt van Lake Sonfon. 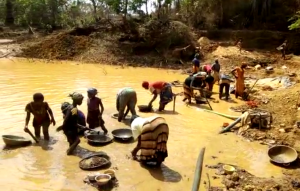 Het bevestigt wat er in de vraag heb geprobeerd samen te vatten.
YANlid:
Hello YAN members, this is what I saw today in a mining zone, see how children are used in the mines, instead of sending them to school or to learn something else. It is really pathetic, more especially for the girls, so as a group we have to under take a tour to this mining zone, to talk to the steak holders and the parents. As we did at semmaya village and we succeeded. 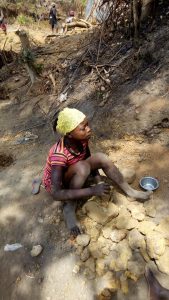 I interviewed one of the girls Kumba Koroma and asked her why are you not going to school instead living in the mines. She answered:
” I had wanted to attend school but my parents insisted, because they think education is expensive in this country, so they prefer I stay with them in the mines till my breast are mature then they can send me to marriage ” 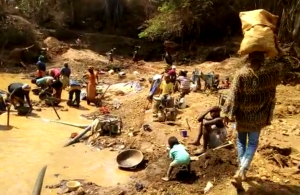 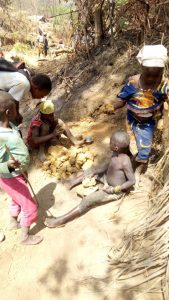